What's next for 2012 presidential race?

CNN's John King talks to Jessica Yellin and Ken Herman about the new phase of the 2012 presidential race.

Can Obama's jobs tour be effective?

– Rick Perry is in. What is initially so striking is how trained his staff already is in putting on a general election looking campaign. It will be small things like this that help him.

– Michele Bachmann won the straw poll, but she may wish she had not. It is the single greatest predictor of who will not win the Iowa Caucus, let alone get the nomination.

– Tim Pawlenty is out. Newt Gingrich, Rick Santorum, and Herman Cain may want to follow Pawlenty's example. Pawlenty was in it to win it, not to sell books or get a TV deal.

– Artificial Sweeteners: Ron Paul abandoned his principals and called for big government interference on a woman’s right to choose in an attempt to make him more palatable to Iowa voters proving that he is just a typical cynical politician after all.

– Hard to Swallow: Barack Obama spent time with Spanish language newspapers calling on Latinos to turn on the GOP because of a lack of immigration reform as he continues to deport young Latino students in record numbers; can somebody tell him that Latino voters are beyond being played on this issue? 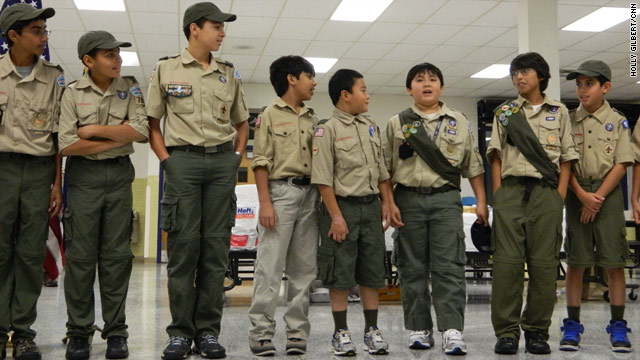 Sterling, Virginia (CNN) – Mohammad Azraf Ullah, 17 years old of Herndon, Virginia, has been observing the Muslim holy month of Ramadan since he was a young boy. Believed to purify the body and soul, the food and water fast from dusk until dawn for 30 days is part of the five tenants of Islam.

"Patience is one of the biggest things I've learned" said Ullah. "It reminds me how great God is, and you really have to be grateful to him for everything he gave you."

Such patience and reverence should help Ullah meet the requirements for his Eagle Scout badge, which he's set to earn in the coming months. The high school senior and Boy Scout participated in the annual Iftar dinner – or "breaking of the fast" meal – hosted by the All Dulles Area Muslim Society Scout program on Saturday night.

Based in Northern Virginia, ADAMs is one of the largest American Muslim organizations in the United States.

Their scout program provides an outlet for youth in the community to practice the basic beliefs of Islam while following the scout law.

Like every future Eagle Scout, Ullah must complete a service project that benefits the community. He also has to appear before a board of review, made up of experienced scouts from the district that assess the character and integrity of the young man up for Eagle Scout status.

Brian Kale is a veteran of Boy Scouts of America and serves as the Goosecreek District Roundtable Commissioner. He testified to the seamless interweaving of possessing a higher faith and meeting the requirements to become an Eagle Scout.

"The Boy Scouts of America believes in a higher being. We're not sectarian, we do not identify one higher being over the next. However for a boy to earn Eagle Scout he has to have a reverence toward a higher purpose and a higher being," Kale said.

Whether the scouts are Christian, Jewish, Muslim, or practice a different faith, Kale emphasizes well roundedness as the focus of Boy Scouts of America.

"The fact that their faith may be different than the boy next to them is immaterial. It's about learning proper skills, character development and a good moral compass."

Kale emphasized one of the 12 points of the Boy Scout Law that reflects a spirit of tolerance and spirituality – "A Scout is reverent. He is reverent toward God. He is faithful in his religious duties and respects the convictions of others in matters of custom and religion," the law reads.

The credo encourages a kind of religiosity with scouts and troop leaders and mandates a spirit of loyalty, bravery, and self-discipline.

Abdul Rashid Abdullah, scoutmaster of Troop 786, said the Islamic faith and Boy Scouts of America are harmonious in philosophy and in practice.

"The Islamic ideals and the scouting ideals are the same. They're compatible," he said. "I can easily talk about the scout law and talk about Koranic verses that co-relate to those scout laws, so it makes it really easy."

Abdullah has been involved with Boy Scouts of America since childhood. Raised a Roman Catholic, Abdullah converted to Islam while attending University of the Pacific in Stockton, California.

"I met a lot of students from Malaysia and they gave me the opportunity to ask questions. When I asked the questions I was like, 'That's spot on to what my beliefs already are.' So I just embraced it," he said.

Abdullah, who also serves as a regional chair of the National Islamic Council on Scouting, seizes the opportunity to interweave the fundamental beliefs of Islam with everyday scouting activities.

"I often tell parents, 'You're going to take your kids to Sunday school or whatever to learn the Koran and to learn Islam," said Abdullah. "'When I take them out camping, we're going to put that into practice."