Oklahoma Gov. Mary Fallin joins CNN's John King by phone to talk about the tornadoes that ripped through her state.

– The Senate GOP and Senate Democrats both appear hell bent on not producing a budget this year. Neither side wants to own the fiscal problems we are in or present clear actions to solve those problems lest they get beat up.

– Rush Limbaugh went on Facebook yesterday to say glowing things about Governor Tim Pawlenty. Jeb Bush echoed Limbaugh this morning. Conservatives seem to be gravitating more and more to Pawlenty as, if nothing else, the least bad in the field.

– Keep up the prayers for Missouri. The Red Cross and Salvation Army could both use help right now.

– NY-26: Special Election D-Day is here, with momentum (measured by the Sienna poll) shifting decisively to the Democrat Kathy Hochul in Jack Kemp's old district. The results will be analyzed and over-analyzed for weeks as the parties search the tea leaves for 2012 messages. Bottom line – the GOP is running into a buzz-saw as it tries to balance its deficit and debt rhetoric (read entitlement reform) with the fact that its base is aging. Mediscare unfortunately works – with ugly attack adds showing grandma getting pushed off a cliff. The GOP is going to have to do a better job of defending Paul Ryan's plan or risk renouncing their claim to being serious on the deficit and the debt.

– T-Paw's Rough Launch: Tim Pawlenty's new campaign theme is that he is going to be the tough truth teller in the race.

– Don't Count Huntsman Out: On the heels of John King's interview with Jon Huntsman, I've got a column coming up on CNN.com taking a look at the chances for the sole standard bearer of the center-right.

CNN's John King talks to a Joplin, Missouri, elementary school principal about the tornado that hit the small town.

– Mitch Daniels not getting in is a stunning surprise for a lot of folks. As of Friday, prominent folks in Washington were still getting calls that he was in.

– Mitch Daniels dropping out helps Tim Pawlenty be the anti-Romney.

– Republicans are in an interesting position with the War Powers Act. They believe it is unconstitutional, but they also think Obama is violating it. What they do or do not do with hearings in the House of Representatives could set an interesting precedent for the next Republican President.

– Double Talk: GOP insiders are pushing the talking point that the Presidential field is taking shape while conceding to each other privately that no good choices are emerging.

– Bait and Switch: Home Land Security Secretary Janet Napolitano’s deployment of the “Secure Communities” immigrant policing program is under investigation by the U.S. Inspector General, activists have claimed the Administration has used bait and switch tactics to meet the goals of enrolling and retaining its “partners”.

– Three Card Monte: Coburn and Santorum aides have been grateful that Arnold Schwarzenegger took the media scandal spotlight last week; the Senators are deeply tied to the Sen. Ensign sex scandal and need as many diversions as possible.

Could Huntsman challenge Obama in 2012?

John King talks to former ambassador to China, Jon Huntsman, about throwing his hat into the 2012 presidential race. 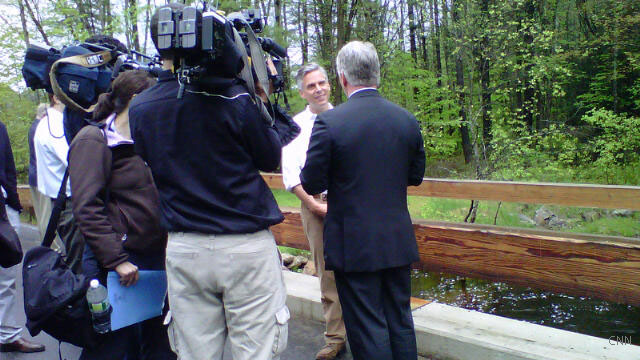 – Barack Obama's speech on the Middle East was drab, boring, and had nothing new. The call for moving Israel's borders is nothing new. Obama did the same in 2008. But to lay out Israel's negotiating points for them is something new and will make today's visit with Prime Minister Netanyahu interesting. I expect the Prime Minister will call on the United States to cede back all territory gained from the Mexican cession in 1848.

– Today is the day Barack Obama meets Richard Nixon in Libya. It is the 60th day of the Libyan operation, which under the War Powers Act (that has long been championed by the left), means Obama must either seek congressional permission or withdraw. I expect him to vote present.

– There is a lot of buzz over who Nikki Haley might endorse for President. I have no inside knowledge, but I know Nikki Haley is super smart and it would not surprise me if she took her time. Remember, Sarah Palin put Nikki Haley over the finish line and we still don't know what Palin is going to do.

– The President is going to offer up $2 billion in debt forgiveness in his "Arab Spring" speech. Someone might want to ask the Bowles-Simpson Commission how that's going to help.

– Tom Coburn is out of the Gang of Six. He wants $9 trillion in cuts. He's negotiating with himself in favor of tax increases to go along with it. Tax increases won't pass the House. Coburn has multiple colleagues who are offering up plans that balance the budget and cut the deficit without tax increases. Has he decided he is the indispensable man in all of this?

– Mitch Daniels continues to irk conservatives. A 2009 video has leaked out of Daniels telling the moderate to liberal Republicans lobbyists at the Ripon Society that the GOP needed to avoid wedge issues in the 2010 campaign. Good thing the GOP didn't take his advice. Many in the media seem to be pushing Daniels on conservatives. But I believe it is not so much the media pushing Daniels as the media unable to understand why conservatives are not embracing a guy the media views as conservative. The answer is because Daniels has a habit of punching conservatives in the face while siding with them on issues so the media doesn't confuse him with the [cue scary music] "far right".

– Full Portrait: Obama emerges as a foreign policy President while the embers of the great recession are still dangerously hot, will the promise of safety override the need for jobs?

– Impressionism: A last minute teleconference from GOP Sen. Marco Rubio in Florida fails to bring out the vote as Jacksonville elects a Democrat for Mayor, is Rubio already losing his mojo?

– Forgery: Newt Gingrich removes all of his immigration policies from his web sites; will the stains of truth bleed through?

IMF chief could be released on bail