John King and panel discuss Donald Trump's presidential campaign and decision to withdraw from the 2012 race.

John King is out on a boat tour of the flooded areas in Louisiana. Sent in from his blackberry, is this picture of Governor Bobby Jindal receiving a call from President Obama. Tune in tonight @ 7p ET, we'll be LIVE from Morgan City, La. 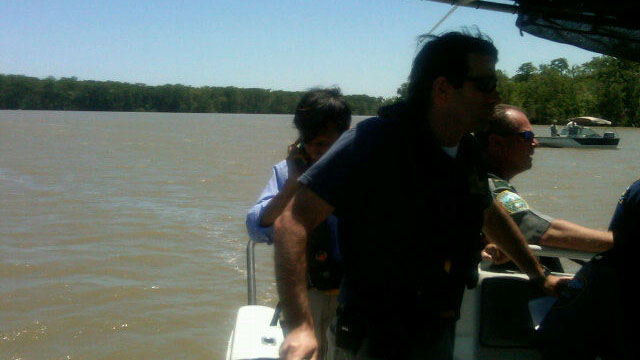 – Huckabee is out. The pro-life and evangelical crowds will probably begin flocking to people like Tim Pawlenty and Herman Cain.

– Newt Gingrich has long had a reputation for being undisciplined. Yesterday, on Meet the Press, he defended the individual mandate and attacked Paul Ryan's Medicare reforms. Today he is backpedalling.

– With Huckabee out, all eyes now are on Mitch Daniels and a decision could some soon. But with tales of phone calls from Laura Bush, whispers about the Rove machine, and Daniels' own reputation, look for his opponents to begin spinning him as the second coming of George W. Bush.

– It Always Happens in Threes: Conservative Senators Coburn and Santorum seem to be steeped in the Ensign hush money sex scandal in what will become a reminder to independents on why they distrust the GOP.

– Dreams in the Morning-An Angels Warning: Obama angers immigrant activists by issuing a fundraising letter touting his support of the DREAM Act, maybe his fundraising pen should sign a student deportation ban.

– If Your Nose Itches You’ll Kiss a Fool: Gingrich has Sunday pundits mouthing his absurd talking point that he is no longer a flame thrower while he defends his Obama is the “food stamp President” bomb by asking if America really wants to “become Detroit”.