Giffords' Doc: She can stand with help

The Congresswoman's doctor explains what is next for Gabrielle Giffords and gives updates on her condition telling CNN's John King that she can stand with help.

(CNN) – On the 50th anniversary of former President John F. Kennedy's swearing in and the delivery of the iconic line, "ask not what your country can do for you, ask what you can do for your country," former Rhode Island Rep. Patrick Kennedy said he's heeding his uncle's words.

The most recent Kennedy to serve elected office plans to commemorate the 50th anniversary of his uncle's charge to the nation with his own plan to "unlock the mysteries of the mind" and find cures for neurological disorders. Kennedy stressed the importance of treating soldiers that suffer from those illnesses and the need to "de-stigmatize wounds of the brain."

"Let's do what he did for the moon shot and do it for the mind shot, to unlock these mysteries of neuroscience and free millions of people," Kennedy said Thursday on CNN's "John King, USA." "The notion that suicide is the biggest enemy we have should open our eyes to saying you know everybody can benefit from us doing this research for the benefit of the soldier."

JFK, in a special message delivered to Congress on May 25, 1961, called on legislators to fund a project to put a man on the moon by the end of the decade. Astronaut Neil Armstrong accomplished the goal after Apollo 11's lunar module landed on July 20, 1969.

Although the Kennedys are currently out of elected office for the first time since the Truman administration, Patrick Kennedy – the son of the late Massachusetts Sen. Edward Kennedy – said members of his family are now serving though different avenues. And he was quick to describe his cousin Joe's "perfect profile" for elected office.

Joseph P. Kennedy III – the son of former Rep. Joseph P. Kennedy II and the grandson of the late Robert F. Kennedy – served in the Peace Corps before earning his law degree at Harvard and is currently an assistant district attorney in Cape Cod, Massachusetts.

"If I were to identify someone who's got a perfect profile, and I hope if he ever chooses to run I'll certainly, like all members of my family, be there to help him," Patrick Kennedy told CNN Chief National Correspondent John King.

In the spring of 2010 Joe decided against running for Congress in the midterm elections. 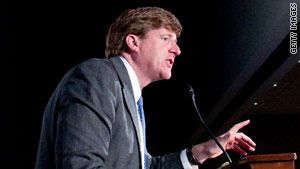 Good day. It is the 50th anniversary of the JFK presidential inaugural, and the 30th anniversary of the Reagan inaugural. Interesting to hear politicians in both parties remind us, despite coming from different parties, these two leaders had many things in common. Also of note today: China’s president received a far more chilly reception on Capitol Hill than he did at the White House. There were bipartisan complaints about human rights, and Speaker Boehner says he also objected to coerced abortions. The Chinese people don’t have such divisions and debate in their political system, so whatever your views on this issue or that leader – it’s a good day to cherish our way. Has its flaws, sure, but it beats the competition.

In their bullet points today, both Erick and Mario touch on the China challenge – and notice the bipartisan sarcasm and more or less bipartisan agreement. You find it when you travel the country, too: Most Americans think China by far gets the better deal in this relationship. Noteworthy, too, are the conflicting takes on the health care debate: Erick sees the repeal effort as a guiding compass heading into 2012, while Mario sees an opening to give the GOP a pro-insurance company label. And Mario’s No. 2 is a reminder of something we have talked about many times: elections have consequences, and the GOP 2010 gains are now playing out in new policy initiatives coast to coast. Enjoy the day. – John King

– Uncivil Action: The Colorado GOP introduces a copy cat of Arizona’s 1070 bill in the Colorado State Senate. Civil Spin: A boycott of Colorado would ease traffic during ski season.

– China gets to keep stealing our intellectual property and we get two used pandas. Hu's in charge here?

– The repeal movement has begun. If the GOP keeps it alive, they hurt Obama's ability to pivot right.