Tucson, Arizona (CNN) - The father of Arizona massacre suspect Jared Lee Loughner had a front-yard argument with his son the morning of the killings and had told a neighbor the 22-year-old was "out of control," according to neighbors and investigators.

The shaven-headed youth had quit a community college in October after being suspended and had been warned not to come back without a mental health evaluation. Postings attributed to Loughner on websites including MySpace and YouTube show "classic signs of psychosis," one expert told CNN.

Loughner had complained for years about U.S. Rep. Gabrielle Giffords - the apparent target of Saturday's bloodbath, according to a law enforcement official.

Loughner is now accused of killing six people and wounding 13, including Giffords, who remained in critical condition with a head wound Wednesday. Among the dead were Arizona's presiding federal district judge, a Giffords aide, a 9-year-old girl and three of constituents who had come out for Giffords' "Congress on the Corner" open house at a local Safeway supermarket.

The morning of the shooting, he had argued with his father, Randy Loughner, in the front yard of their Tucson home, Richard Kastigar, the head of the Pima County Sheriff's Department's investigations bureau, told CNN's "John King USA." The younger Loughner was in the front yard with a bag, possibly a backpack, when his father asked him what he was doing with it, Kastigar said.

"Jared mumbled something back to his dad, and his dad said he didn't understand what was said. It was unintelligible," Kastigar said. "And then Jared left. The father followed. The father got in his vehicle and tried to locate his son and followed the direction that he went and he could not locate his son."

Randy Loughner thought his son "went into the desert some place," Kastigar said. But by Saturday afternoon, he and his wife returned home to find police waiting for them, neighbor Stephen Woods said.

"His hand went on his head. He seemed very upset. His wife was crying. I assume that's when they told him," Woods said. Randy Loughner "was just holding his head, saying, 'No. No.' "

Woods said Randy Loughner had complained to another neighbor that his son was "out of control." Kastigar said the family is cooperating with investigators, and "There's nothing that indicates to us that these were bad folks."

"You know, this is a tragedy for them as well," he said.

Loughner's parents said Tuesday they do not know why the shooting occurred and that they were "very sorry" for the loss felt by victims' families.

"It may not make any difference, but we wish that we could change the heinous events of Saturday. We care very deeply about the victims and their families. We are so very sorry for their loss," they said in a written statement given to reporters gathered outside their home.

Searches of their home after the killings turned up a 2007 letter from Giffords, thanking Jared Loughner for attending a 2007 event similar to Saturday's. An envelop in the same strongbox was scrawled with phrases like "die bitch" and "assassination plans have been made," Kastigar said.

A law enforcement official who spoke on condition of anonymity told CNN Loughner asked Giffords a question at the 2007 event and was unhappy with her response.

"He never let it go," the source said. "It kept festering."

Online, Loughner ranted about poor grammar, illiteracy and "mind control" and argued that space shuttle missions were faked and that people could make their own currency.

"In conclusion, reading the second United States constitution I can't trust the current government because of the ratifications: the government is implying mind control and brainwash on the people by controlling grammar," he wrote in one piece posted to YouTube. "No! I won't pay debt with a currency that's not backed by gold and silver! No! I won't trust in God!"

Alan Lipman, director of the Center of the Study of Violence at Georgetown University, said the postings show "classic signs of psychosis."

"People were looking for whether he was on the left or the right. He was neither," Lipman told CNN. "He was incoherent. Those were signs, classic signs you'd see in a psychiatric unit of formal thought disorder."

And forensic psychologist Kathy Seifert called the postings "absolutely psychotic." Loughner should have been evaluated for schizophrenia, bipolar disorder, autism or other mental illnesses, she said.

"I understand the thing about the grammar," Seifert said. "There is a group, or a person, that talks about how the grammar is used to control the population, and so I hear that he's picking up that from someone else, too. So he's been influenced by other people."

Loughner dropped out of high school in 2006, after being taken to a hospital for alcohol poisoning near the end of his junior year, according to Sheriff's Department records released Wednesday. In 2007, he was arrested for possession of drug paraphernalia, but the charge was dismissed after he completed a pretrial diversion program, according to court records.

When he tried to enlist in the Army in 2008, the service rejected him for reasons it says it can't disclose due to privacy laws. But an administration official told CNN on Sunday that Loughner had failed a drug test.

In October of that year, he approached sheriff's deputies with a complaint about identity theft.

"I noted that Jared was slow to respond to my questions." The deputy who took his complaint noted. "He often hesitated as if he was trying to think of an explanation."

Police were unable to contact him at the number he left for them, and the matter went no further, according to a sheriff's report.

After dropping out of school, Loughner enrolled at Aztec Middle College, a partnership between Tucson schools and Pima Community College that helps high school dropouts transition to community colleges, PCC President Sylvia Lee told CNN. He took classes at the college until October 2010, when withdrew after five contacts with police and a suspension.

Algebra instructor Ben McGahee said he had Loughner removed from his class in June after multiple disruptions in the first three weeks of the course. McGahee said Loughner sometimes shook, blurted things out in class and appeared to be under the influence of drugs at times.

Pima Community College told Loughner that he needed a letter from a mental health professional certifying that he posed no danger to himself or others before he would be allowed to return. Yet nothing in his record turned up in the background check carried out in November, when he bought the weapon police say was used in the killings.

Kastigar said the investigation into Saturday's killings focuses less on who was responsible than why. But he cautioned, "You can't really make reason out of something that is unreasonable."

"Perhaps some psychologist or psychiatrist may opine at some point why they think this happened," he said. "We can present the evidence, give it to experts, and somebody else might come up with why. But law enforcement at this point doesn't have it."

In case you missed last night's show, check out Cornell Belcher and Erick Erickson respond to calls for politicians to tone down the political rhetoric. Tell us what you think...who do you agree with?

– A majority of Americans do not believe the sky is falling with regard to the debt limit.

– Sarah Palin went a tad too far in using "blood libel", but given what's been thrown her way this week it is understandable.

– Does the President have a problem with Britain? This time he's saying our relationship with France is our "Special Relationship." Since when?!

– Don't Expect Any Changes in Gun Laws After Tucson Shooting.

– Since When Do Conservatives Believe Words Don't Have Consequences?

CNN's John King and camera crews wait to talk to Arizona Governor Jan Brewer after her visit Tuesday to University Medical Center to visit some of the shooting victims. 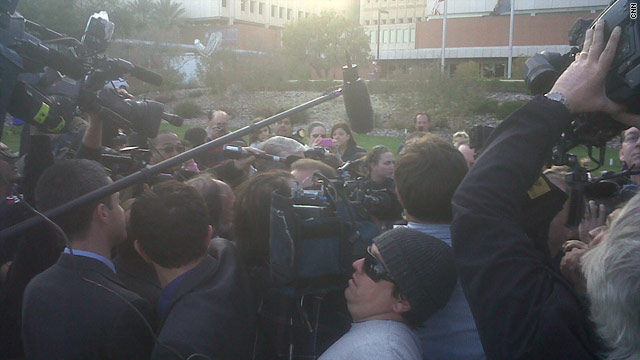