Who is Gabrielle Giffords? 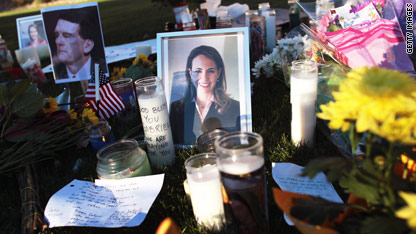 Tonight John King, USA will be LIVE from Arizona to bring you the latest on the Tragedy in Tucson. Tune in @ 7p ET.

– The media is intent on examining political rhetoric in light of Congresswoman Giffords' shooting. Doing so implicitly imputes political rhetoric to the attempted assassination. But we know that had nothing to do with it. Pursuing this angle makes it seem, however, like it does.

– The right should not be bashing Mr. Obama for calling for a Moment of Silence. It is traditional and even President Bush did it after 9/11.

– Prior to Ronald Reagan being shot, many leftists openly hoped he'd be assassinated or die of old age because they deeply feared he would start a nuclear war with the Soviets. After Reagan was assassinated, no one blamed the left. The Discovery Channel hostage taker openly attributed his actions to Al Gore's "Inconvenient Truth." The right refused to take the bait. But we'll spend the next week wringing our hands about Sarah Palin and Glenn Beck because of what happened in Arizona.

– Fallen Hero: Judge Roll who died in the Arizona shooting will be remembered by immigrant rights activists for his fair rulings and his ability to withstand threats from the anti-immigrant right.

– Standing Hero: Student, activist and Congressional intern Daniel Hernandez ran into the line of fire to help his new boss Congresswoman Giffords and may have saved her life with his immediate First Aide efforts.